The stars were glittering as if engraved on the cloud-free sky above the Main Building in Tsinghua University tranquilly. Tsinghua students rode their bikes to their homes and dreams, wrapped by thick clothes in the crisp winter night clear and cold, which was inevitably joked as one of the most intriguing scenes was Tsinghua publicized as a famous resort. 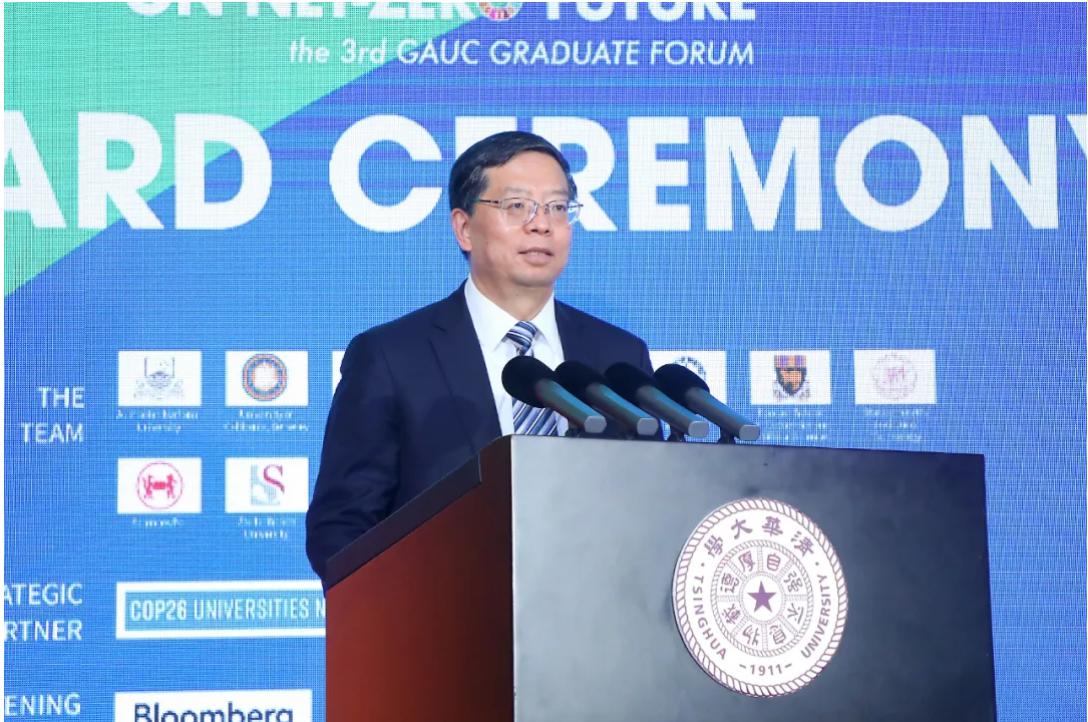 Yong Qiu, the president of Tsinghua University, gave the speech at the Tsinghua Hall. Source: THU-ICCSD

In contrast to what seemed like the normal Tsinghua, the noisy atmosphere inside the hall of the Main Building hinted something grand would possibly happen. Rushing staffs, high-end cameras mounted on the tripods, and small windows glimpsed in the computer screens foretold the opening of a splendour ceremony. 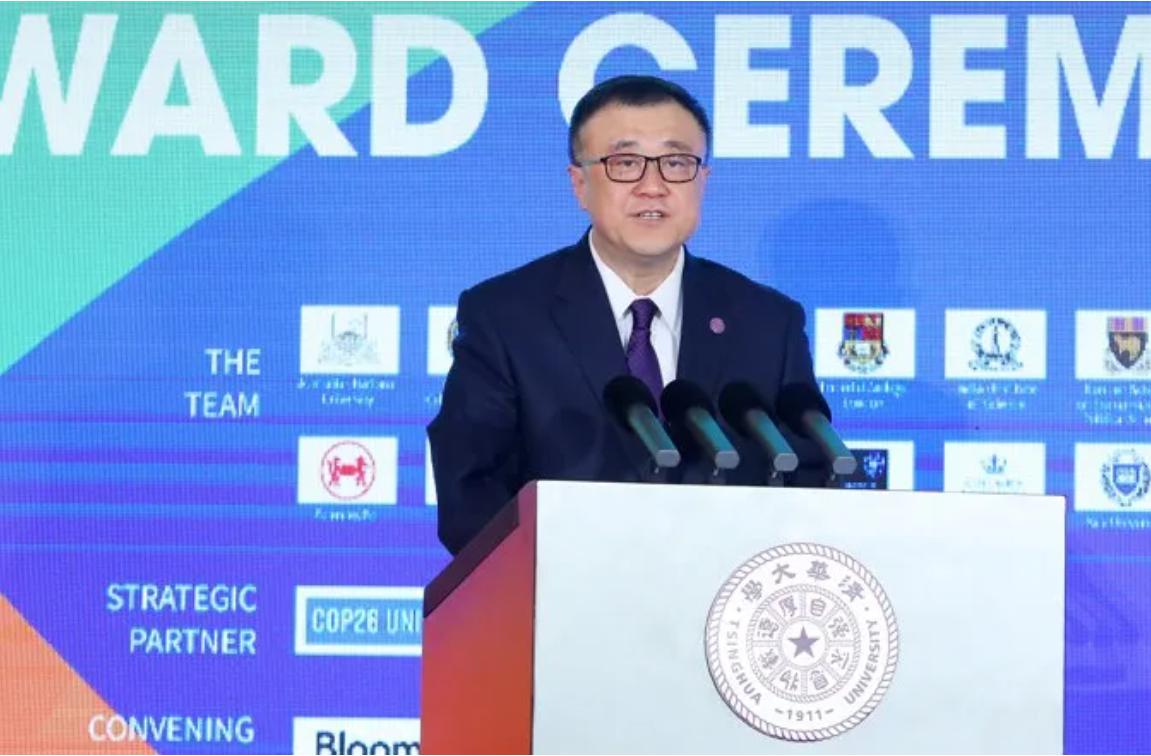 All truth surfaced with such atmosphere culminating at the beginning of the ceremony. Mirrored in eyes was the award ceremony of the academic track of this summit hosted by Bin Yang, the vice president of Tsinghua University. Zhu Deng, a member of the Carbon Monitor team, who participated in the global youth summit on net-zero future organized by the Global Alliance of Universities on Climate (GAUC), was urgently waiting for the official announcement of the best paper awardees, emanating little nervousness. Excited as he knew he won the best paper awards with an exhilarating smiling face, he gave the speech at the summit’s award ceremony, representing all best paper awardees. 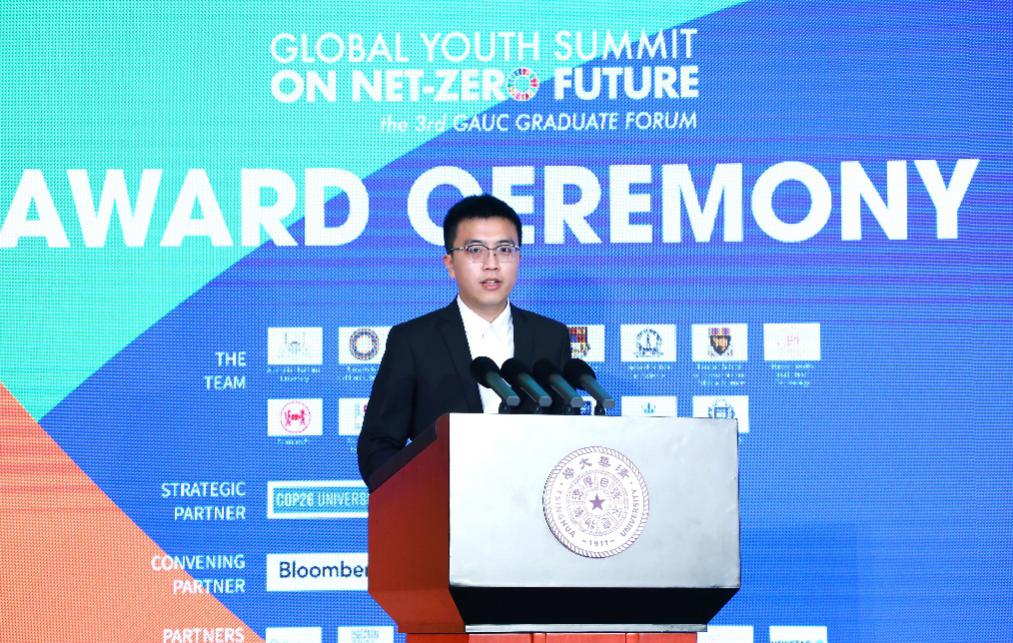 First, Zhu Deng introduced the Carbon Monitor project behind this award-winning work. Under the supervision of Prof. Zhu Liu and the tremendous efforts put by all team members, Zhu Deng and his colleagues built a carbon data monitoring system, called the Carbon Monitor, which enabled us, for the first time, to track the near-real-time carbon emissions from human activities. This dynamic dataset system is derived from various real-time activity data, including the national hourly electricity data, traffic data over 400 cities worldwide, real-time global flight status, etc. They found that, due to the global lockdown, the COVID-19 pandemic caused a nearly 9% decline in carbon emissions in the first half-year of 2020. It was the largest emission drop ever recorded since the pre-industrial level. However, a dramatic emissions rebound has been precisely captured by the Carbon Monitor, whose latest data showed that global carbon emissions have almost bounced back to the pre-pandemic level. These precious data have been posted on Twitter with a high volume of re-tweet and like, accompanying the heated and focused discussions of the general public.

Latest data of the Carbon Monitor project. Source: Twitter.
with waves of re-tweets.

In his speech, Zhu Deng advocated for young scholars that we younger generation should lead more far-reaching research on climate change, to enhance our scientific understanding of that, and to take firm and sound practical actions purposed for its mitigation. Youth should explore every possibility from our actions. It was the era for the younger generation to tackle this challenge regarded as the biggest threat to humanity in the 21st century. 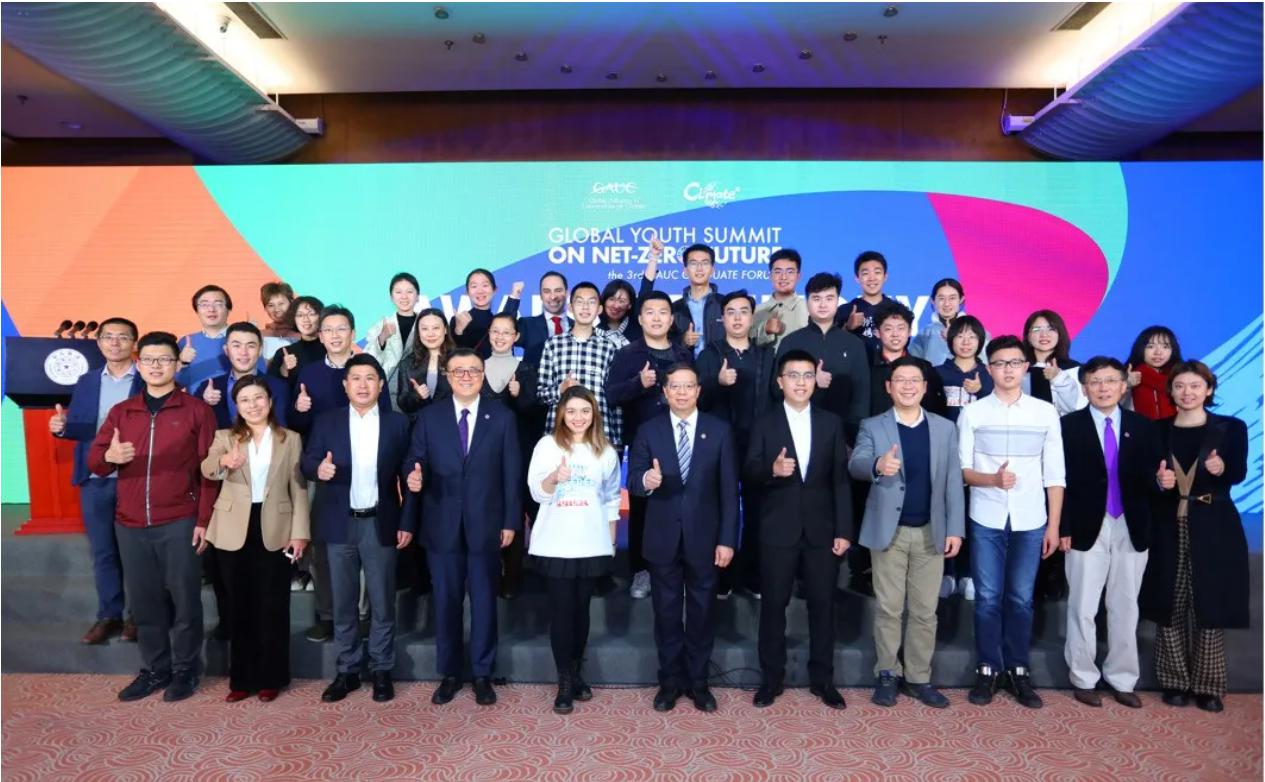 Official photography in the closing ceremony. Source: THU-ICCSD.
(From the view of this photography, Right from [Yong Qiu] is [Zhu Deng] and between [Bin Yang] and [Yong Qiu] at the second row is [Taochun Sun])

Before this award ceremony, Zhu Deng attended the sub-forum hosted by Yale University and shared his research on near-real-time monitoring of global carbon emissions, which won his ticket to the best paper award. The data in this research was utilized to illustrate the global temporary reduction in daily CO2 emissions by Prof. Kai Chen in Yale University in the keynote section of this sub-forum by accident. Our team really thanked Prof. Chen for his recognition of this project, and he thanked our team for its excellent work contributing to the community of climate change. 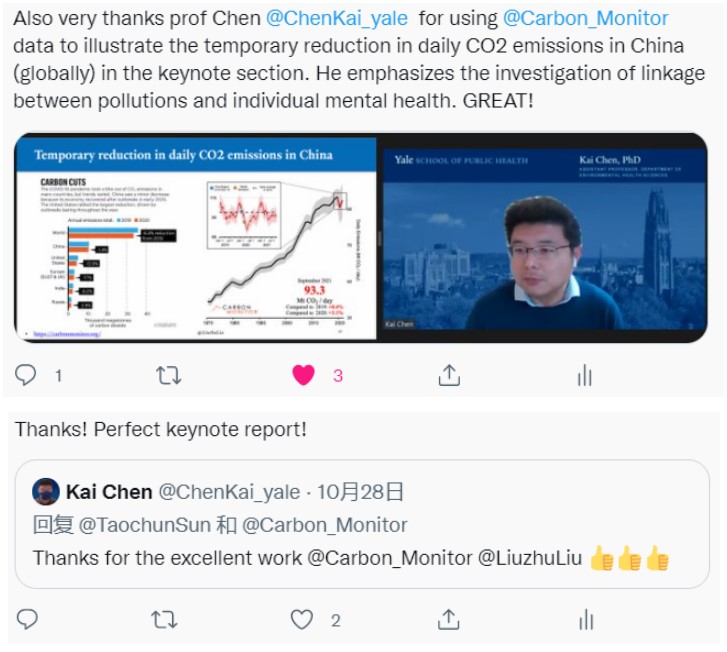 Interaction of our team and Prof. Chen, the invited speaker in the keynote section, Yale sub-forum. Source: THU-ICCSD.
More details

Was this work just a worthless bubble waiting to be pierced or indeed a milestone for the global community of climate change? Indeed a recognized latter one under the spotlight. The data of the Carbon Monitor have already been widely used in various authentic medias and officials, including the United Nations Environment Programme (UNEP), whose previously published Emissions Gap Reports 2021 sourced the data, the World Meterological Organization (WMO) which published United in Science 2021, the New York Times, the Washington Post, Nature. Increasingly permeating focus on this dataset was exploding, highlighting the significance of how it could help reveal the imminent responses of carbon emissions to human activities and the impacts of human activities to carbon emissions interactively.

The award ceremony of this summit solemnly progressed in the China Enterprise Hall, sited at sunshine-bathed Glasgow, where COP26 is being hosted with people worldwide gathering to witness how climate change will be tackled in the near future. COP26 is where the senior experts discuss the future of climate while this data is worth being the robust scientific evidence for their policy-making. Maybe this is serendipitously a coincidence but against the backdrop, reveal some veiled fated interactions between these two.

Taochun Sun, another team member of the Carbon Monitor, is the group leader of the department of international communications in the Graduate Union of Tsinghua. He has put tremendous effort into organizing the entire summit and the previous Sino-US youth dialogue whose purpose was to preheat discussions about this summit and the COP26. He was involved in and led numerous efforts of great significance, including the drafting and revising of the preface of Conference Handbook of the Sino-US youth dialogue, the initial drafting and later revising of the bilingual version of the speech manuscript of Bin Yang, the vice president of Tsinghua University during this summit, the polishing of Zhu Deng’s speech manuscript, and the review of works for this summit, etc. Notably, he got several thank letters for Tsinghua University when communicating with allied universities based on his excellent communication skills.

Thank letter from one of the allied universities.

He expressed sincere gratitude for having this precious opportunity to help organize this series of climate-change-related activities and events, publicized officially by China Daily, Xinhua Agency and other media outlets. 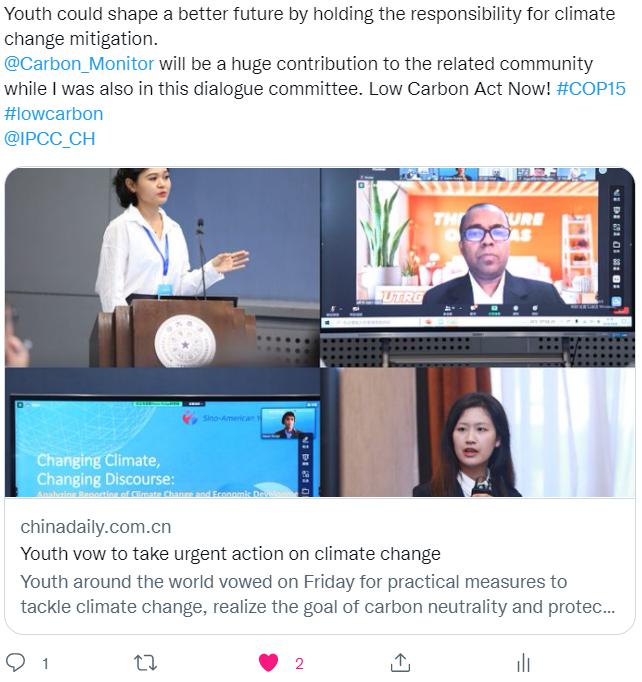 This series of activities and events, including the summit and the dialogue, aims to provide a world-class stage for youth talents dedicated to carbon neutrality, and to contribute the power of universities to different carbon neutrality goals proposed nation-wisely. It will be of far-reaching impacts on the global efforts of climate change in the future.

It was 10 pm, when all the laughs, surprises waned, which was the prologue that all the expectations for the bright future waxed. In COP26, the future facing humanity was still being discussed with multilateral collaborations emerging as the fruits of senior experts, covering documents and agreements from nations and the United Nations. Youth hope all research-inspired policies and actions stemming from those really help someday for one of those purposes, maybe including building the community of shared future for mankind, right? 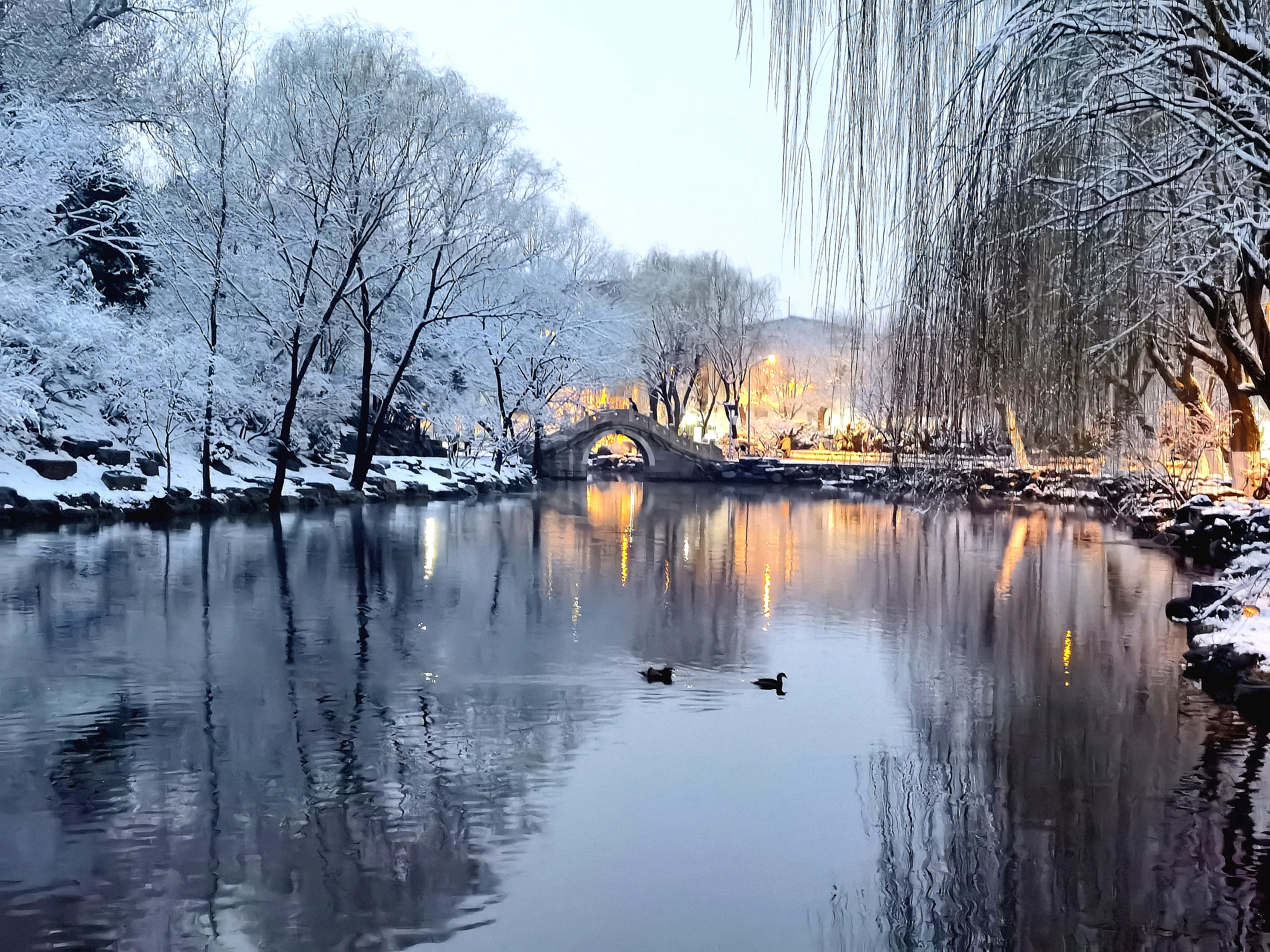 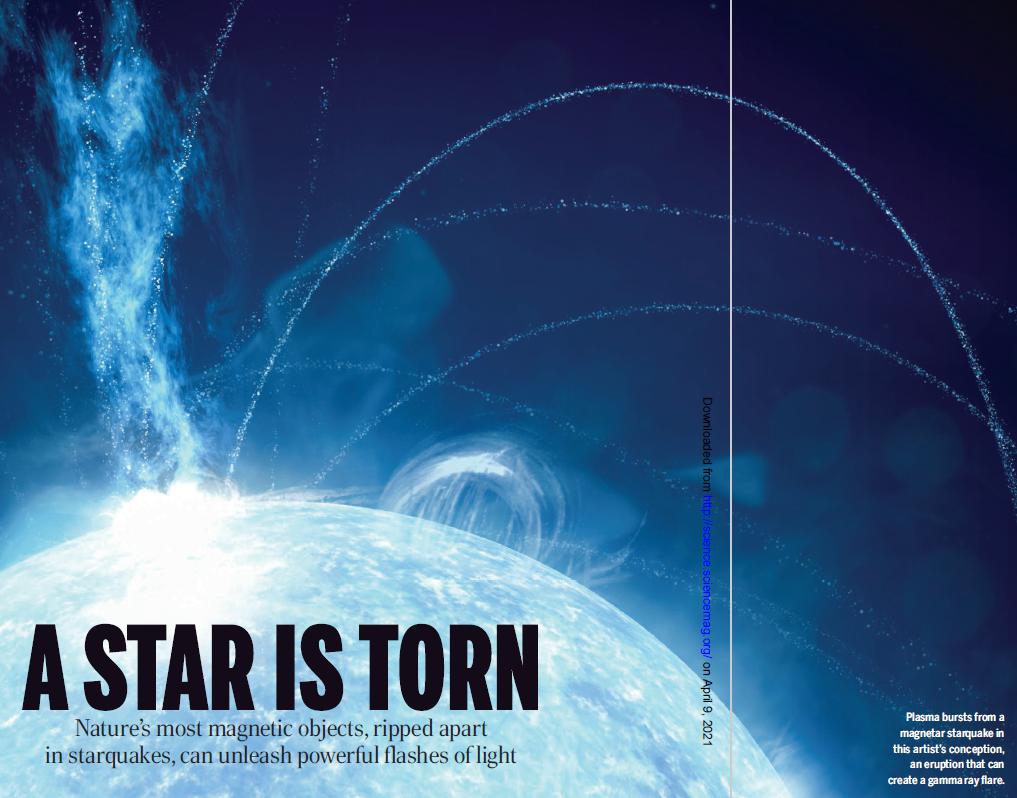